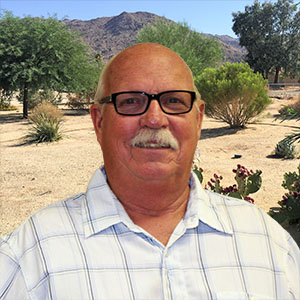 What do you love most about Twentynine Palms?
I like its small-town atmosphere and its beautiful desert surroundings. We always say the desert grows on you, and it always does.

Professional and community involvement:  Bob retired from the Twentynine Palms Fire Department in May 2002 after serving for 32 years, starting as a volunteer and rising up the ranks to Fire Chief. He later served as a 911 dispatcher at the Marine Corps Air Ground Combat Center from September 2003 – October 2016. He is a part-time tow truck driver/operator for Bailey’s Auto Repair & Towing.

Bob was also a Trustee for 12 years with the Twentynine Palms Public Cemetery District. He served six years as the Director of the Action Council for 29 Palms, Inc., a nonprofit dedicated to celebrating the history of Twentynine Palms through world-class public murals.

In his free time, he enjoys spending time with his grandchildren, traveling, and at the shooting range.